Facebook for marketing: Getting out what you put in?

Facebook has over 1 bn users and some organisations find that their Facebook pages receive more views than their own websites. But how typical is this? We’ve taken a look at how different brands are using Facebook to attract customers. The theory is well known: businesses post interesting news and updates to attract the attention of consumers and encourage them to share their posts, providing a low-cost platform for promotion, helping to boost reputation and loyalty. But as of April 2013, businesses are getting very different marketing results from Facebook and effort is not always a good predictor of success. Dell and Lenovo, on the face of it similar companies, are exploiting their Facebook platforms to different degrees. Dell have a fan base of 5.7 million whereas Lenovo have .5 million. Having a large number of fans alone is not useful without engaging well, but in this first stage – reaching as many people as possible – Dell is clearly succeeding. We looked at some other well known brands. 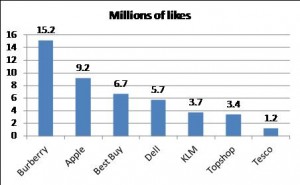 Once growth in likes is underway, engagement with the audience is very important, if a page does not engage with the fans, they will not view the brand. Facebook’s content sorting algorithm (which sorts posts by how many views a page has) means that if a page doesn’t engage well fewer people see its posts. This chart below shows the average number of Facebook status updates in a 3 month period, here we can see Best Buy being very active compared to the popular Burberry. 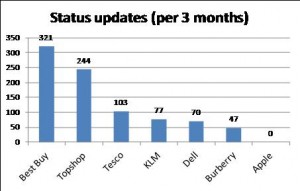 The chart below shows the average number of comments per status update, showing that although Burberry doesn’t post as often as others, the response is high, while the opposite is true for Best Buy. 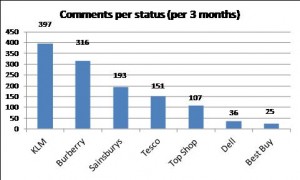 Our analysis showed that of the Facebook pages we studied, the statuses posted by organisations on their pages were separated into these categories: – Promo 22% – News/info 56% and – Announcements/Warnings 22%. Interestingly, KLM is a relatively small airline with a fleet size of 116 compared to British Airways with 256. However it has 3.7 million “likes”, 77 statuses per 3 months and 397 comments per status. This is a much better result than for many other airlines. KLM’s social media platforms expanded in April 2010 when the Icelandic volcano Eyjafjallajökull erupted causing serious disruptions. KLM used their Facebook to keep their customers up to date with the situation. KLM then decided to create a social media hub where their customers can be served through social media. They offer a 24/7 service where their customers can contact KLM about baggage, reservations, tickets etc. They promise a reply within an hour and problems resolved within 24 hours. By comparison Burberry has large Facebook following despite not apparently making the same degree of effort. Burberry have 15.2 million likes but only 47 status updates per 3 months and an average of 25 comments per status. Facebook offers the opportunity for organisations to successfully build a name for themselves and reach a large audience – but for most brands it requires quite some effort.